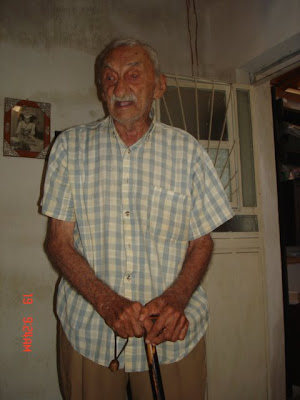 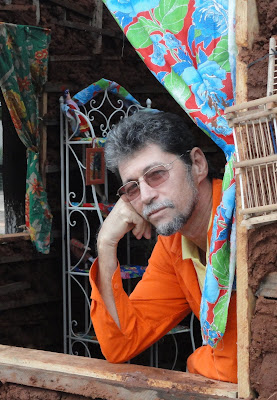 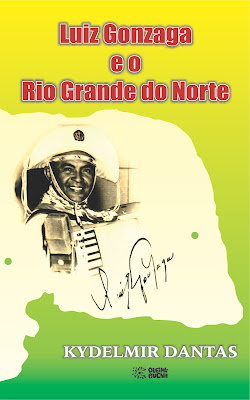 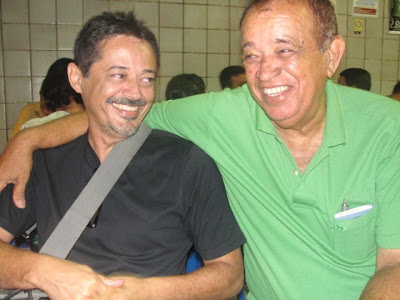 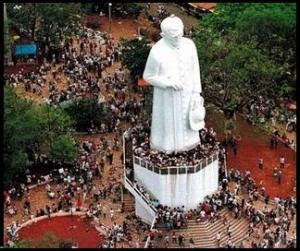 Today the figure of Father Cicero is highly venerated in Juazeiro – www.eunapolis.ifba.edu.b

In general, Brazilian messiahs didn’t condemn the old organization so much as the eagerness for profit manifested more and more by the colonels, making them forget their obligations. Cowhands and sharecroppers fully suffered the consequences of this. They could historically situate the start of this degeneration of relationships and compare this new state of things to a not too distant past. The messianic movements expressed the desire moving toward solidarity at a time when all feelings of solidarity were tending to disappear.

Two directions could be perceived: taking tradition back up and reinforcing it with a higher principle, divine authority, the patronage of God — this is what Father Cicero’s movement did — ; or going beyond the old organization, which revealed itself to be unable to resist the capitalist mentality and the increase of selfishness, in order to again find the meaning of the original community.

They had recourse to religion as the objective spirit of community, in order to seal the pact of alliance. According to that spirit, catholic ritual consecrated the links that united them. Such rites constituted the solemn affirmation of the refusal of the old world that had become profane and the entry into a new world that only now presented a sacred character.

“Once the Holy City was founded, the messiah tried to identify it as much as possible with Holy Places. Particularly in the northeast, the landscape lends itself to surprising comparisons with that of Judea as it might be seen reproduced in the crude religious images on sale at the fairs of the sertão. Father Cicero had quite ably baptized the ruggedness of the terrain around Joazeiro with names drawn from the gospel: the Mount of Olives, the Garden of the Holy Sepulcher, Calvary. Decorated with small chapels and numerous crosses, these places attracted the curious, moved pilgrims and constituted new evidence of the holiness of the places.”[49]

These were not heretical movements in the true sense of the word, even though the church condemned them. They did not criticize the sacraments as the disciples of Amaury de Bêne, the Taborites or the Anabaptists had done in their times. They contented themselves with opposing authentic catholicism — their own — to the corrupted catholicism of the priests.

If religious sentiment was deeply rooted in society, the Church was not the citadel of thought that it had been in medieval times, and the efforts of some country curates to fight popular traditions were ridiculous. It did nothing but reinforce the feeling in the peasant that only the beatos, their messiahs, knew authentic catholicism.

Besides, it was rare to see the priests who chanced to live in those remote regions corresponding to the ideal the poor had of the christian life. The sertanejos criticized them especially for selling various rites. This is why they felt a strong resentment toward the official clergy who were accused of betraying their function in its most sacred aspect. The sermons of the messiahs reflected this opinion. Severino, one of Lourenço’s apostles, proclaimed: “God’s word is not sold at any price; God’s word is free.”

In the legends of the Iberian Peninsula, the Brazilian prophets always drew their inspiration from popular catholicism. Their way of life corresponded perfectly to the idea that peasants had about catholic saints. They were pilgrims, lived on handouts, distributed the gifts they received to the poor. The catholicism that is fed by legends, mysteries, superstition, familiarity and mysticism, was essentially millenarian.

“Time seems to have stopped for the uncouth population of the sertão. Having sidestepped the general movement of human development, it still breathes the moral atmosphere of the illuminated…”[50]

They expected God’s vengeance, but this expectation was dynamic. The poor started to organize themselves for concrete actions like the occupation of land and energetic defense of their conquests. It was an expectation that, far from preventing social activity, incited it. Canudos was the Tabor of the sertão where an intense activity reigned. The millenarians were animated by an enthusiasm that nothing could crush. They did not isolate themselves, and they were not isolated. They did not feel that they were the elect. They were sertanejos, jagunços. The spirit of their activity was simply changed.

This spirit, which inspired the disciples of Lourenço for example, resembled that which had inspired the diggers’ colony on Saint George hill in London two to three centuries earlier: “He who works for another, for payment or to pay a penalty, does not carry out just work; but he who is resolved to work and eat together with everyone else, in this way making the earth a common treasury, gives Christ a hand in liberating creation from slavery and cleansing everything of the original curse.” (Winstanley)
Like pastor Lee of England in 1650 (“A hedgerow in a field is as necessary in its way as authority in the Church or the State”), the Brazilian state deluded itself. The occupation of land, even though for religious purposes, was in itself a challenge to authority. It was not the intention of the Brazilian millenarians to enter into open war with the state. They were waiting for God’s vengeance, but in their waiting challenged the state. 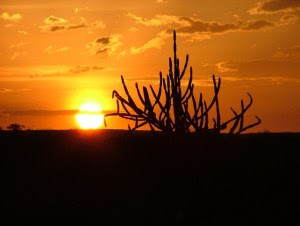 Northeast of Brazil, the land of the sun

But for them, this collective organization of work, this common activity, did not represent wealth. Perhaps the spirit was enriched by this experience, but it did not find its wealth in itself; it was formed from its beyond. The wealth that the messiahs promised to their faithful, an ever-recurring promise in their sermons, could not, in any case, be confused with prosperity and well-being, nor, above all, and this is the essential thing, could it be reduced to a limited common activity, however human it might be. It had to be the conclusion of social activity, the moment of infinite squandering, of the feast, and the moment hoped for was that of its universality.
An entire world stood opposed to its realization.
Chronology
1500
The Portuguese Pedro Alvares Cabral discovers Brazil
1530
Colonization advances towards the territory of the interior
1550
Beginning of the slave trade
1716
The colony becomes a viceroyalty
1817
Beginning of Sylvestre José dos Santos’ messianic movement
1822
Declaration of independence and proclamation of Empire
1835
João Ferreira’s messianic movement.
1871
Enactment of the law “of the free wind”, toward the abolition of slavery. Pilgrimages of the “Conselheiro” in the state of Bahia and of Father Cicero in the state of Ceara. Groups of cangaceiros multiply.
1888
Abolition of slavery throughout the country.
1889
Proclamation of the Republic. Father Cicero performs his first miracles. The Conselheiro preaches insurrection against the Republic.
1896–7
The Canudos campaign against Antonio Conselheiro. The cangaceiro Antonio Silvino begins to declare himself.
1913
Seditious movement of Father Cicero against the federal government.
1914
Arrest of cangaceiro leader Antonio Silvino
1920
Lampão joins Sinhô Pereira’s cangaço.
1922
Lampão is proclaimed gang leader.
1926
Lampão’s interview with Father Cicero.
1930
Getúlio Vargas’ presidency.
1934
Father Cicero’s death. Birth of Lourenço’s messianic movement.
1937
Getúlio Vargas’ dictatorship.
1938
Trap in Angico and death of Lampião. Lourenço’s movement slaughtered.
1940
Corisco dies, and with him cangaceirismo disappears.

[1] On of the individuals involved in the French group, Os Cangaceiros.
[2] Having found an English translation of the book that Georges Lapierre makes frequent reference to with regard to the movement around Conselheiro (Os Sertões by Euclides da Cunha, translated as Rebellion in the Backlands), several other interesting facts come out. The movement was a tri-racial group, involving indigenous people, those of African descent, those of European descent and every possible mixture thereof. In addition, individuals from all parts of the under classes were included — thieves and prostitutes alongside former cowhands and “holy women”. A significant part of the message that drew people to Canudos was a liberation from work, which was seen as worthless activity and detrimental to the spiritual needs of the moment. In addition, despite Conselheiros own extreme asceticism and personal refusal of sexual intercourse, he not only turned a blind eye to what Cunha calls “free love”, but even promoted it by saying that in these lasts days, there was no time to worry about such trivial matters as marriage vows.
[3] On this level, I tend to see Lampião’s relationship to Father Cicero as perhaps less respectful than Georges Lapierre portrays it. When Father Cicero gave Lampião a title, arms and ammunition in 1926, of course, Lampião gladly took them, but for his own purposes. Rather than doing what the good padre wanted, he simply went on his way, living his outlaw life, an indication to me that he recognized the limits of the priest’s activities.
[4] The backlands, particularly the backlands of northeast Brazil centering in Bahia. Sertoes is simple the plural form of sertão.
[5] Wealthy owner of a fazenda, a cattle ranch.
[6] Social bandits of northeast Brazil.
[7] Pereira de Queiroz: Réforme et Révolution dans les Société traditionnelles
[8] Euclydes da Cunha: Rebellion in the Backlands, p. 135 (University of Chicago Press, Chicago, 1944).
[9] Ibid., p. 135, taken from notebooks found in Canudos
[10] Scrub-forest land.
[11] Cunha, op. cit., p. 30
[12] Blessed one, the implication is that he is perceived as a living saint.
[13] Cunha, op. cit., p.135
[14] Ibid., taken from notebooks found in Canudos.
[15] Literally a reference to the bundles of weapons carried by these outlaws, the term was also used to refer to their bands.
[16] Cunha, op. cit., p. 138
[17] Ibid,, p. 138
[18] Ibid., p. 140
[19] Literally, ruffian, but Cunha tended to use it to refer to all sertanejos. Apparently the people who followed Antonio Conselheiro to Canudos took the name upon themselves with pride.
[20] Poetry found in Canudos written on little bits of paper.
[21] D. Sebastião: King of Portugal (1557–1578), died in the course of an expedition against the Moors. The populace did not want to believe in his death. He became a legendary and messianic figure comparable to that of the Emperor of the last days: he would be returned from the isle of Mists, having organized an army to free Jerusalem.
We find this Portuguese legend from the end of the 16th century to again be quite popular in Brazil. It formed the nucleus of two important messianic movements that manifested in the province of Pernambuco in 1817 an 1835: that of Sylvestre José dos Santo and that of Joao Ferreira.
[22] Cunha, op. cit., p. 136
[23] Ibid., pp. 160, 162
[24] Ibid., pp.143–144
[25] A small palm.
[26] Jacare literally means alligator, a reference to the strength of this knife.
[27] Cunha, op. cit., p.149
[28] .Ibid., p.154
[29] Ibid., p. 178
[30] Types of repeating rifles.
[31] A gum-bearing tree.
[32] Cunha, op.cit., pp. 274–276
[33] Ibid., p. 280
[34] This is a reference to the ancient Parthians who would continue shooting arrows at their enemies even as the retreated from a lost battle. This is the source of the English term “parting shot”, originally “Parthian shot”. — Translator’s note.
[35] Cunha, op. cit., p. 325
[36] Ibid., p 235–236
[37] Ibid., p. 436–437
[38] Ibid., p. 475
[39] Ibid., p. 475. Euclydes da Cunha’s book ends with a slander typical of the time: “… they took [Antonio Conselheiro’s head] to the seaboard, where it was greeted by delirious multitudes with carnival joy. Let science here have the last word. Standing out in bold relief from all the significant circumvolutions were the essential outlines of crime and madness.” (p. 476)
[40] Hegel, Principles of the Philosophy of the Right
[41] Josué de Castro, Une Zone Explosive. Le Nord-est du Brésil
[42] Cangaceiros: Ballads Tragique. Illustrations by Jô Oliveira, text by Mario Fiotani
[43] Cangaceiros: Ballade Tragique
[44] Cangaceiros: Ballad Tragique
[45] Euclydes da Cunhu, Les Terres de Canudos
[46] Vittorio Laternari Les Mouvements Religieux des Peuples Opprimés
[47] Pereira de Queiroz, Réforme et Révolution dans les sociétés traditionelles
[48] Needless to say, today arbitrary power is total and guaranteed.
[49] Pereira de Queiroz
[50] Euclydes de Cunha
Source of information – 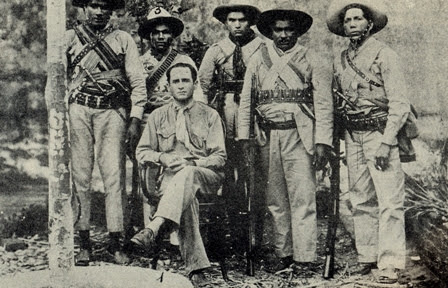 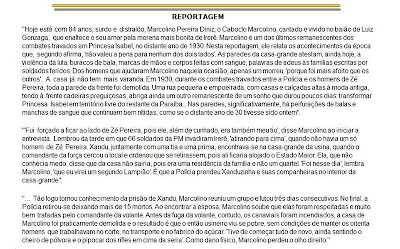 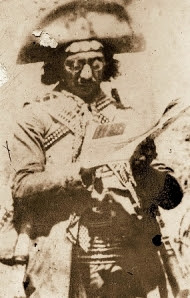 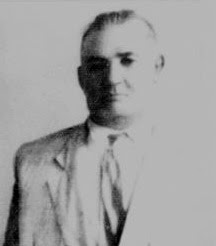